JTAG, is an interface (and standard) developed to easily debug digital systems. However, you need a JTAG emulator to connect to this interface, and commercial versions are pretty pricey.

One emulator, called the Wiggler by Macraigor, has a very simple design, and uses the parallel port. People have cloned the design of this Wiggler and posted schematics online (there are many out there). In addition, Macgraigor has free software called OCDRemote to operate these Wigglers. At one point, Macgraigor modified their Wiggler hardware by adding a connection on the parallel port between pins 8 and 15, and updated the software to check for this. Eventually, this was also discovered, and now cloned Wigglers are built with this loopback connection in place so OCDRemote can be used with them.

Other software exists to talk to the Wigglers. See OpenOCD, UrJTAG, H-JTAG tools.

As I mentioned, there are many Wiggler clones out there. Here is a popular one I have copied into Eagle (so I can later make a board if I want): 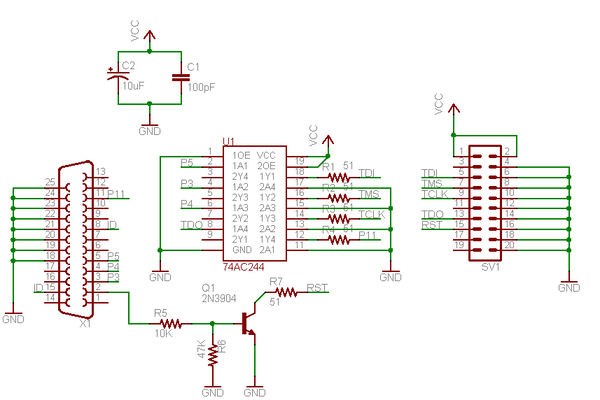 You can download the CadSoft EAGLE schematic file here: jtag_wiggler.sch

I built this Wiggler on a perf board. Here is a picture of it: