My 5V regulated switched capacitor boost converter consists of two boost stages, a 74x14 based oscillator, and a simple cycle skipping regulation scheme. I implemented the top two switches (SW1/SW2) of each boost stage with Schottky diodes for their relatively low voltage drop, and the bottom two switches (SW3/SW4) with PMOS and NMOS FETs. The diodes work in their switch roles because D1/SW1 will be reverse biased in the discharge/stack phase, and D2/SW2 will generally be reverse biased in the charge phase (unless it is charging the second stage). Since the first and second stages are being operated in phase, the total boosted output is theoretically 3*Vin. The FETs are driven by the 74x244 buffer which has roughly 12mA source / 12mA sink to ensure relatively fast turn on time.

I intended my switched capacitor boost converter to be used in a battery application, so I simulated the input source as a 3V source (like two stacked AA 1.5V Alkaline cells), with a worst-case 0.240 ohm series resistance. 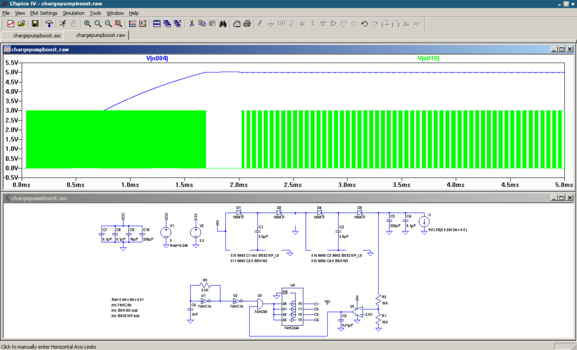 This simulation shows the regulated switched capacitor boost converter operating on a 3V input, creating a 5V output and sustaining a 250mA current source load that kicks in at 2ms. The blue waveform is the output voltage, the green waveform is the switching drive signal. These simulations use the manufacturer’s models for the PMOS and NMOS FETs selected below. The simulated start up time is roughly 1.7ms, though this largely depends on the choice of large output capacitor, as well as the input voltage. The voltage ripple is load dependent: with this 3V input, 250mA load, it is roughly ~20mV. At 300KHz, 3.3uF flying capacitors, and 0.240 ohms output resistance on the input voltage source, the simulations show that the boost converter can sustain up to 350mA with a 3V input, and 100mA with a 2.5V input.

The simulated efficiency is only about 55%. This is likely due to the power loss from the diode’s forward voltage drop, as well as shoot-through during switching transients through the PMOS and NMOS FETs. Changing the diodes switches to all FETs for total synchronous rectification, and delaying the PMOS/NMOS signals to prevent shoot-through would improve efficiency. In addition, a stronger driver than the 74AC244 to turn on the FETs more quickly into their linear regime would also improve efficiency.

The diodes in the boost stages are the 1N5817, as marked in the original schematic. The PMOS is the Infineon BSS215P, and the NMOS is the NXP BSH103. These are small SOT23 surface mount logic-level FETs, chosen for their small gate threshold voltages. The BSS215P has worst case of roughly 200mOhm RDSon, and the BSH103 roughly 400mOhm RDSon for the input voltage range of interest.

I used 3.3uF tantalums for the two flying capacitors, as used in the simulations. The assembled version works well, even slightly better than the simulation, with a matching measured efficiency of approximately 55%.

Here is a version of the discrete 5V regulated switched capacitor boost converter I prototyped on a breadboard. From left to right: 74LV14, 74LV08, LTC1440, 74AC244, input decoupling capacitors, FETs and 1N5817s, output decoupling/hold-up capacitors. The SOT23 FETs were soldered to an 8-pin DIP socket.

And the assembled version on a perf. board: